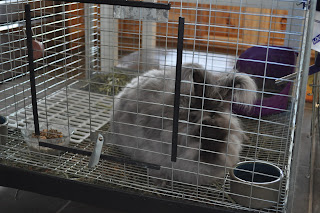 Her new name is Houdini.  She's the escape artist of bunnies.  Several mornings lately,  I've opened the door to the studio and,  there in the hallway,  I'm greeted by The Bun.  She always seems pleasantly surprised to see me and hops over to be picked up.  There's absolutely no indication of guilty feelings on her part ! 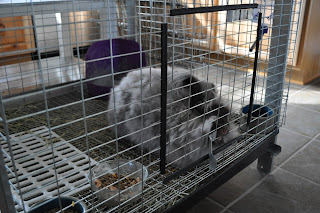 Obviously,  I've created in her this sense of entitlement and being confined to her cage all night is not how she thinks her life should be.  I've even tried wiring her cage door shut and she's managed to get that undone several times.  To her credit,  there have been no accidents.  She's still using her litter box all the time and there have been no new electrical wire chewing episodes ( though I have tried to rabbit proof most of the plug-ins that are within her reach ).   I do get the feeling that,   when she has freed herself during the night,  she probably sits on the couch thinking about how she has outsmarted me,  once again ! 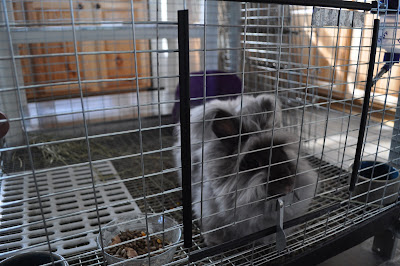 I fully expect that next on her list is learning to use the remote control for the television.
Posted by Dianne MacDonald at 2:13 PM

Email ThisBlogThis!Share to TwitterShare to FacebookShare to Pinterest
Labels: Phoebe