Officially, it's 1to 1,  but really,  I'm winning now.  Mr. Dandy managed to decimate the first plantings in my fall garden.  Before all those tender green things showed up,  Mr. Dandy could only be seen checking out the garden late in the evening.  He'd been serving as the clean-up crew,  picking at the fallen tomatoes and squash that I had decided were too far gone.  It didn't take long before those tender lettuce leaves,   broccoli and kale looked as though they'd been blasted by a shotgun.  It broke my heart because this is the first year I've actually done a pretty good job of getting a fall planting in the ground. 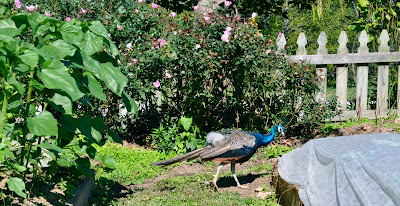 Thankfully, I have a weapon now!  Row covers are saving the day and under them,  the plants are flourishing.  In the mad rush to finish spiffing up the farm for the wedding day,  the garden has gotten little to no attention.  I'm already thinking about and making plans for next year's garden.  You have to be an optimist to raise a garden in Kentucky.  It's often too hot,  too cool,  too wet,  too dry,  or as it was this year,  all of those things in the same season. 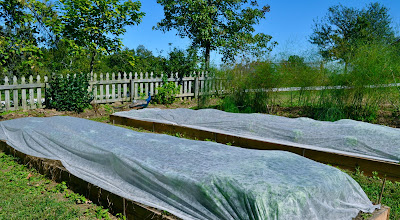 Speaking of the wedding,  it's almost here.  Five more days and the big event will be happening.  I expect that once it's all over,  we are going to collapse,  but at least we'll be caught up on all most of the chores that needed doing.  Of course,  here's the thing about living on a farm.  The chores are never really finished.
Posted by Dianne MacDonald at 1:02 PM