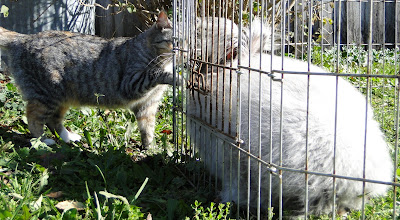 There was a ( very ) small meet and greet in front of the barn on Saturday afternoon.  The Bun was introduced to Sadie,  our itty-bitty barn cat.  Phoebe was in an exercise pen taking the air,  when Sadie decided to check her out.  Sadie is a bit of a wild child.  She's three years old now ( still so tiny )  and she only tolerates your affections when she wants to.  She's a fierce warrior when it comes to protecting the barn from critters who don't belong there,  so we're happy to have her,  even if she's not a lap kitty.  The Bun was interested in getting to know Sadie,  but I think Sadie was put off by the sheer size of her.  It's funny to look back at the pictures I took when I first brought Phoebe home.  She's definitely a big girl now. 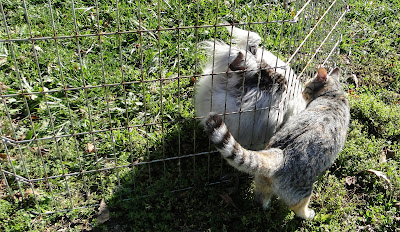 Phoebe has "graduated" to living in the barn now.  About a month ago,  she developed a bad habit of flinging litter out of her litter box and it was landing all around the kitchen of the studio.  Not good.  She still has visitation privileges and comes in for grooming and play time.  I felt bad about putting her out,  but honestly,  I think she is just as happy in the barn where there is always something going on.   I do think starting her out inside the studio was a good thing,  because she's still very friendly and loves to be held.  She's due for shearing soon and I'm close to having enough angora to actually spin up some yarn.  Not sure what I'll make with it.  When I raised angoras before, I began by using some of their fiber to knit a hat for my first grandchild (who is now 21 years old ! How did that happen ? ).  It was a sweet little hat with the fair isle patterning done in the angora.  Maybe this time I should knit a big girl version with The Bun's fiber.


Anyone else, but me, having difficulties with blogger uploading photos today?  There were better pictures, but blogger kept putting stripes through them !  I give .............
Posted by Dianne MacDonald at 1:36 PM