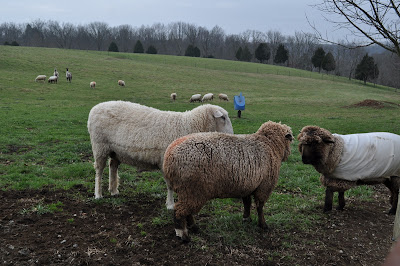 Maude ( the CVM ) apparently got up on the wrong side of her hay bale this morning.  She was a grouchy girl and started picking on Olive as soon as they went out into the big field.  That head-butting stuff is disturbing to watch ( and hear ), but they rarely carry on with it for any length of time.  Usually,  the instigator gets bored with it and wanders off.  That big white sheep is Buddy and he's the peace-maker, lamb baby-sitter and company keeper in the flock.  Buddy is a wether ( remember this post ? ),  so he's allowed to be in with the girls now that breeding season is over.  I love that he was trying to peacefully discourage this little dust-up.  I watched for quite a while this morning,  just to be sure I wasn't imagining it.  He kept stepping between the two and protecting little Olive from Maude.  How sweet is that ?  He didn't give up until Maude quit harassing Olive. 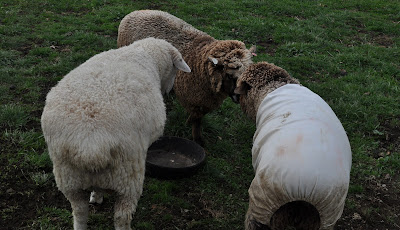 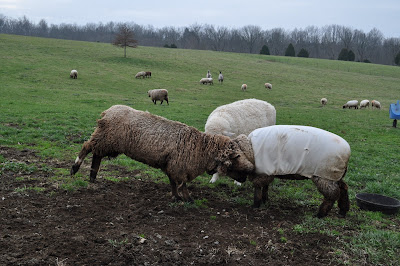 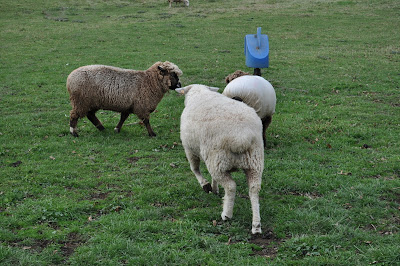 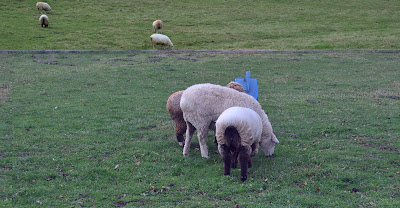 Maude is a Romeldale/California Variegated Mutant.  Romeldales originated in the early 1900's,  from breeding Romney rams to Rambouillet ewes,  for the purpose of getting finer, heavier fleeces and market lambs of good size.  CVMs came about in the 1960's when a breeder in California noticed the unique markings of a ewe in his flock and continued to breed for that.  So,  while it is somewhat confusing,  all CVMs are Romeldales,  but only Romeldales with the distinctive badger face markings are classified CVMs.  CVMs are on the American Livestock Conservancy's endangered list and are listed as critical.  Because I no longer have a purebred CVM ram,  I will not have any CVM lambs next spring,  though those distinctive markings often show up in crossbred lambs.  You can see a little of that in Olive's markings.  In all the years I have been raising sheep,  I've never had any with the personality traits that my CVMs display.  I don't know what it is.  Maybe I just bring out the weirdness in them !  They are the only ones in the flock who climb,  eat tree bark and generally stay completely to themselves.  I'd be interested in knowing if anyone else has CVMs that do those things.

Anyway ....... peace has been restored,  thanks to Buddy.  He's such a good boy and truly the buddy-sheep around here !
Posted by Dianne MacDonald at 3:48 PM