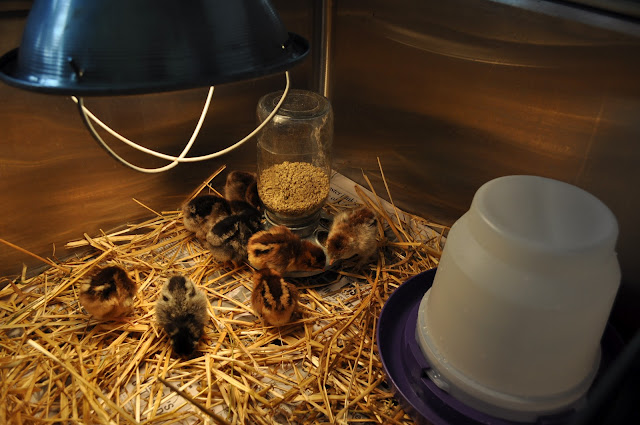 Yes, chick days have arrived here at Tanglewood Farm.  I've been looking forward to getting some new chicks this spring, due to the advanced age of some of our hens and the fact that three of them met an untimely demise recently.  Metzger's is a small country store not too far from the farm (which means less than 50 miles, if you live where I live).  My friend, Lindy, told me she bought some chicks there last spring.  In the past, I've shared an order with a friend and ordered from Murray McMurray because their minimum order is 25 chicks, which is a lot more chickens than I need.  After calling to see what breeds they would have and then doing a little research, I settled on three breeds that I've never had before.  They are all brown egg layers and are purported to be calm, quiet and sturdy breeds.  I ended up with three Speckled Sussex, three Dark Brahmas, and two Silver-laced Wyandottes.  Baby chicks have to be one of the cutest babies on the farm (but, not cuter than lambs, of course).  Though we are having crazy warm weather right now, it would normally still be in the 50's, which is too cold for chicks this young to survive without a mama to shelter them.  So, at this moment they have taken over one side of the big stainless steel sink in the dye room.  It's a well known fact that chickens are not known for their compassion, so acclimating them into the flock will be a little tricky.  Looking at the photos I took this morning, I discovered that some of them are already sporting tiny wing feathers!  When they start flying out of the sink ... well, let's just say I might have to make other arrangements! 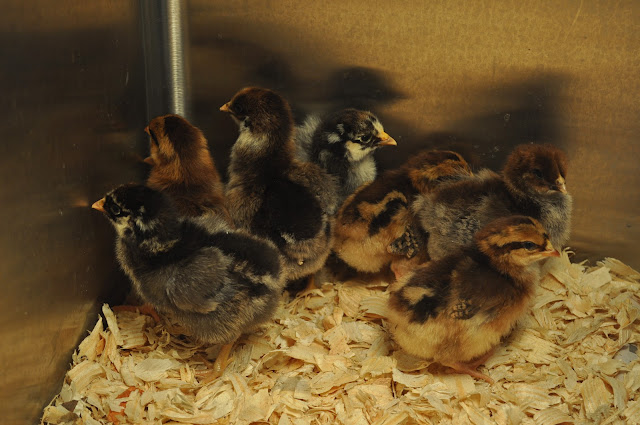 So, as I already mentioned, we are having crazy warm weather.  Crazy, like 80's.  In March!  Over the weekend, I mowed the house and studio yards.  The last time I mowed was in December.  Does anyone else see the unfairness in this situation?
Posted by Dianne MacDonald at 2:18 PM