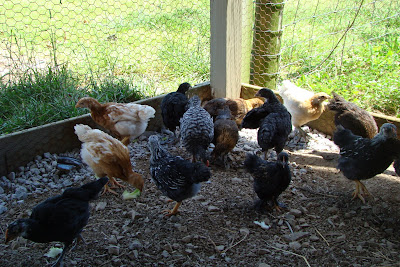 Remember those tiny chicks from not long ago? Well, they are on their way to being all grown-up chickens. I took this picture sometime last week and you can see that they are mostly feathered out now and growing bigger everyday. These guys can really put away the food!
Early last week, they hatched (pun not really intended) two escape plans. There was a tiny hole in the wire that surrounds their enclosed pen and, of course, 8 of them found it and made their bid for freedom. The chicken round-up that followed was a comedy routine---at least for anyone looking on. I, personally, did not think it that humorous at the time! I closed the hole, looked closely for any more and thought all was secure. So, when I got to the barn the next morning, I was dismayed to see that Holly, the new Pyrenees puppy, was just getting ready to chow down on one of the chicks. Yes, there was yet another tiny hole and more exiting the safety of their pen. Once again, chicken round-up, this time minus one casualty. Now, I'd be the first to point out that given the size of a chicken's head, there can't be a lot of brain matter contained in there, but why oh why would you leave your friends, food, water and comfortable surroundings just because you saw a hole in the fence? When they are fully grown and have figured out that they should lay their eggs in the nest boxes provided (rather than in the barn loft, inside the hay-baler or the lamb's creep feeder), they will be let out of the pen every morning and put back in at the end of the day. In the meantime, Holly will mature and learn the rules of co-existence.
Every day on the farm brings a new challenge. Believe me, I'm never bored!
Posted by Dianne MacDonald at 11:13 AM