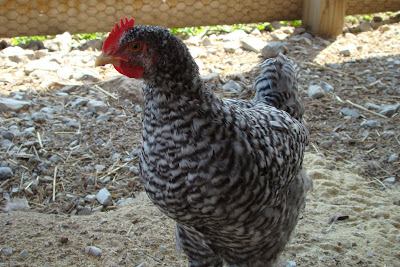 That's what I said a few mornings ago. I heard an unusual noise while I was feeding the chickens and you can guess what it was----sounds of a rooster learning to crow! I don't know why I hadn't noticed that one of my new "hens" was sporting a big comb these days. Sometimes when I'm doing chores, I'm on auto-pilot. I try to pay attention to the general behavior of all the animals, just to make sure everyone is feeling all right and at the moment he seems to be feeling fine and dandy. I somehow missed this change in detail. I am pretty sure he is a Silver-laced Wyandotte. I knew there was a chance we could end up with a male or two and was hoping if that happened it would be a banty rooster rather than a standard. All the banty's I've had before have been docile and friendly, but I can't say the same for the standards. Here's hoping he is a nice boy and doesn't get aggressive. Luckily, we already have a home for him, if he doesn't work out here. One of my husband's clients just happened to mention that if we had extra roosters, she would like to have them. So-this guy is on probation at the moment. He had better be on his best behavior!
Posted by Dianne MacDonald at 2:40 PM