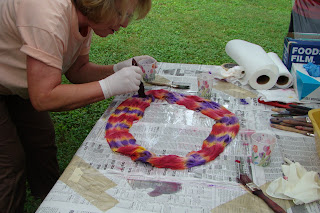 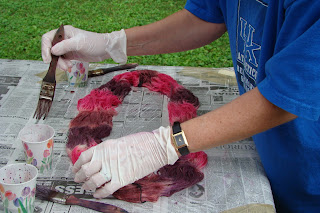 Over the weekend, I got to do some major enabling with two friends. Both have been knitting about 2 years now and I thought it might be time to start expanding their horizons (addictions). Another friend who teaches spinning often hosts dye workshops and so I signed the three of us up for a day of playing with yarn and dye. I did dye 2 skeins of Knitpicks sock yarn and some roving from my sheep, but mainly I was there to cheer them on their maiden voyage into the land of no return. (Next on my agenda is spinning. They both profess to have very little interest in learning to spin, but just give me a little time!) It was so vindicating to hear them say over and over again how much fun it was learning to dye. I see more dyeing "play-dates" in our future. 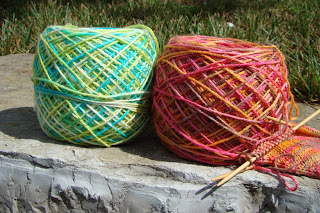 My two skeins don't look like anything I have ever done before. I made myself pick colors and combinations I wouldn't be likely to wear. The one on the right is Country Classics Mt. Aqua and Key Lime and has new grand baby written all over it. The one on the right is a combination of Chestnut, Tomato Red, Pumpkin and a little of Cantaloupe on top of it all. Though I thought it wasn't for me, now I'm thinking it just might be! And, yes, that is the beginning of yet another sock toe already cast on. (How else, I ask you, could I really see what it was going to look like?) Country Classic dyes are really easy and basically fool-proof. They're a great way to get started. We used Knitpicks 70% Merino/30% Silk dyeable sock yarn and it took the dyes beautifully.

And no, I don't feel a bit guilty for my part in the beginning of my friend's new found obsession. After all, what are friends for but to share all the good stuff amongst us?
Posted by Dianne MacDonald at 6:00 PM

Email ThisBlogThis!Share to TwitterShare to FacebookShare to Pinterest
Labels: Dyeing