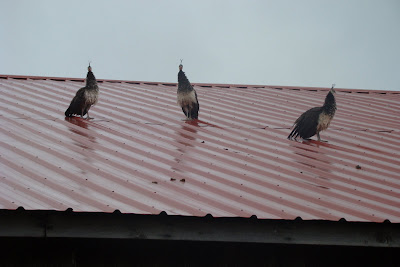 ....or lack thereof, as may be the case with these peachicks. When I went to the barn to feed this morning, I only saw one peachick walking around with the mother. I searched high and low, walked the fields, accused poor Holly of bad deeds and finally gave up. I had just let the chicks out of the dog kennel three days ago and had been watching them closely to see that they stayed close to the hen. Mrs. Dandy is pretty vocal and aggressive if anything seems to get too close to the chicks, so I thought, given their size, they were ready for freedom and life around the barn instead of being contained in a 12 x 12 dog kennel. I know, given the size of their little peachick heads, there can't be much gray matter contained in there. When I finally looked up---I mean really up, there they were......huddled way up there on the barn roof in the pouring rain. They looked completely miserable, but there's not much I could do, except hope they fly down sometime soon. At least now I don't have to worry that they are not strong enough to fly up in the rafters of the barn to roost with the adults at night......that is, if they can figure out that they need to be inside the barn to fly up to the roost.
We have finally, finally gotten a nice, slow rain this morning and the temperature has cooled down significantly, which is such a relief. We need to have at least a little real fall weather before winter sets in around here. I keep hearing all these folk methods for predicting a bad winter. There's the woolly worm theory and the number of berries on the holly trees and how thick the animals coats are getting. I don't know about any of them being true, but (and I may live to regret saying this) I hope we are in for a real winter, with the ground frozen and some appreciable amounts of snow. I say, "Bring it on!"
Posted by Dianne MacDonald at 1:37 PM