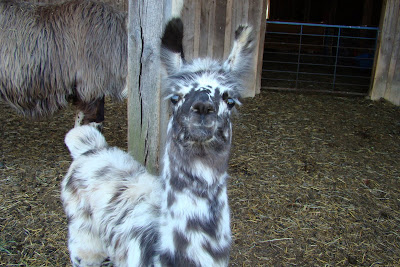 Does this girl have an attitude or what? Pippi (sometimes known as Miss Priss) is so full of herself, she is about to burst. Obviously, she is growing fast and feeling more sure of herself. There is nothing like having a new baby around to keep things interesting.

I don't know about other places, but fall is festival time in Kentucky. Every weekend, there's a plethora of festivals to choose from----everything from sorghum to sheep and wool. On Saturday I drove to Falmouth, Kentucky to take part in a Sheep to Scarf demonstration at the Kentucky Sheep & Wool Festival. (I know, it is usually Sheep to Shawl, but our loom was small!) I was spinning, along with several other women I know, and everyone, but me, took a turn at the loom. Several had never even used a loom before, and learned on the spot. (I do know how to weave--have for about 20 years, but woke up with some weird pain under my right shoulder blade and decided not to aggravate it further by the repetitive motion weaving requires.) My friend, Sara, has taken on the challenge of turning the festival into something that actually has sheep and all things sheep represented there. This year there was a full tent of vendors and another with animals. I decided not to be a vendor this year, but may just give it a try next year. 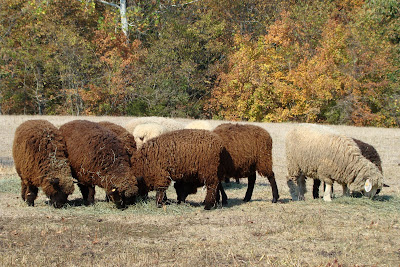 Today it is back to the routine. Animals to be cared for, clothes to wash, house to straighten, vet client's records waiting to be filed, on and on. I cannot imagine how anyone can ever say they are bored. I need a day that lasts about 36 hours in order to do all I should do....not to mention having time to do what I want to do (not that I think for one moment I could last through a 36 hour day). As you can see, we are feeding our precious hay already. Normally, I would not be feeding hay until sometime between Thanksgiving and Christmas and now I'm just hoping we have enough to make it through til spring. It's possible that if we ever get any rain, the grass will come back for a while. Supposedly we have our best chance in a long while later this week.

Meanwhile, get out in the sunshine, if you can, and have a good Monday.
Posted by Dianne MacDonald at 9:51 PM