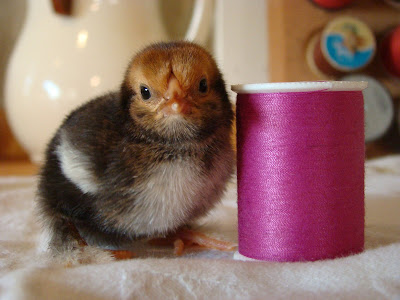 Well, she did it. I wouldn't have put money on the possibility of that hen actually hatching out any of those banty eggs, but on each of the last two days, an egg has hatched, revealing a teeny, tiny chick! Yesterday afternoon, after one of the chicks fell out of the nest box (about 3 feet off the ground)and survived, I decided I needed to move chicks, surrogate mother hen, and the rest of the eggs to a lower and safer location. This was somewhat tricky because once I moved everyone, the hen could have abandoned the nest. I cut a cardboard box to resemble the nest box and filled it with some straw. She was very indignant when I started pulling the chicks and eggs out from under her! I managed to catch her and put her under my arm, and with the chicks and eggs in the box, I moved them all into the 10 X 10 dog kennel. When we put the peahen and her chicks in there last summer, we put netting around the bottom of the pen to keep the little ones from wandering outside the safety zone and getting picked off by the barn cats. I was so relieved to see her settle back on the nest and tuck those babies right under her wings. They are so tiny, it's a little scary to try holding one in my hand (the spool of thread gives you some idea of their size). She still has 6 eggs in the nest, so time will tell how many more (if any) will hatch.

And don't you just love that expression?
Posted by Dianne MacDonald at 8:38 PM