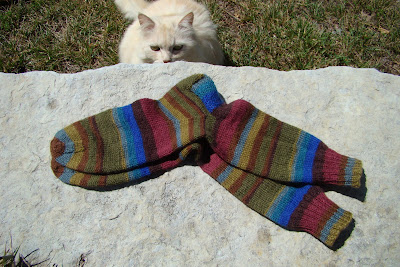 Farming with livestock is so often about life and death. It becomes somewhat easier to be philosophical, especially if it pertains to an animal with whom I have not formed a close bond. Please don't think I take death casually, even then. I care a great deal for all of my animals and only want to provide the best care I possibly can. The real pain comes from losing an animal that has been a big part of my life for a while.

My old cat, Buster was such an animal. He came to me over 15 years ago at a very difficult stage of my life. I was going through a divorce from someone I had been married to since I was 18 years old and Buster was a welcome distraction and a comfort. He always had a quirky personality and was affectionate to everyone; people, dogs, sheep included.(The exception was the cat we "inherited" when we bought the farm. He never really warmed up to her and periodically tried to "muscle" her around, just to show her that he was the barn boss!) All this to say that last weekend we made the difficult decision to put Buster to sleep. He was in kidney failure and was so very sick. It seemed cruel to prolong his suffering.It was hard.Now he's buried in our little pet cemetery with the other cherished pets who have died since we moved to the farm. The picture above is the only one I could find on my computer, but it very much captures the way he was.

I tried to write this post on Monday and just felt maybe I was being too maudlin, so I ended up deleting the whole post. I'm better now. Still missing him, but trying to remember all the funny, quirky things about him and the good memories. And in an effort to end this post on a happy note, here's something I found today on youtube. I'm probably one of the last on the planet to have watched it, but I thought it was great. (Be sure to turn your sound on--that's half the fun!)

Have a wonderful weekend.
Posted by Dianne MacDonald at 2:56 PM