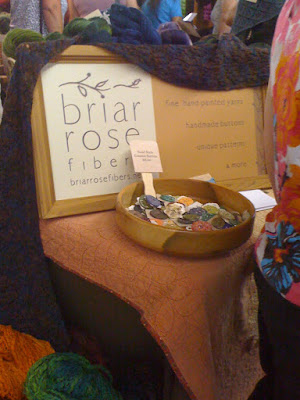 A friend and I left here on Friday and drove to Ann Arbor, Michigan, stopping there overnight to visit and have dinner with my friend's sister and her family. They had prepared a fabulous dinner of Indian food to share with us. It was a wonderful evening of food and conversation.

Early Saturday morning we were on the road again, headed to Allegan for the Michigan Fiber Festival. The last time I made the trip was 5 or 6 years ago, and I was surprised to see that the festival had not grown in that time, but had actually gotten smaller. I don't know if the economy is the reason, but I was sad to see that. In spite of being smaller, with less vendors and fewer people, the quality of goods being offered was terrific. I certainly did my part in contributing to an economic recovery for the area's fiber people. Even though I raise a lot of fiber myself, I can't resist buying from others. I got several different kinds of roving to spin, some beautiful buttons, a small yarn swift, and because one of my favorite vendors, Briar Rose, was there, I had to indulge in a small amount of yarn and several patterns.
Chris, the owner of Briar Rose, has to be one of the most pleasant people I have ever met. She had to be exhausted from the Sock Summit, but observing her waiting on customers, you would never know it. I've visited her booth at many different festivals over the last several years and she always manages to make you feel as though she has all the time in the world and is enjoying every minute she spends helping you. I bought a beautiful rusty red skein of sock yarn (remember, sock yarn doesn't really count!) and the pattern for the Bricker socks, designed by Anne Hanson of Knitspot, plus I just may have happened to buy a few other skeins.
This trip was not really about going to the festival. It was really about going to pick up some sheep I made arrangements to buy several months ago. A new breed of sheep and a new adventure for Tanglewood Farm. More on this in the next day or so.............!
Posted by Dianne MacDonald at 5:01 PM