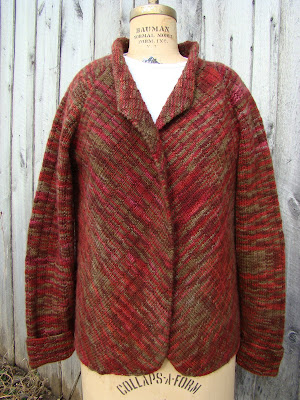 And not just a small finished object either. I finally have something to show that is not a fingerless mitt or a hat! Back last fall sometime, I found this yarn and fell in love. It is Malabrigo (soft, soft, soft) and the color is Stonechat. I bought all ten skeins on the shelf, even though I had no idea what I was going to knit with it. (Well, you know how awful it would be to find the perfect project and be one skein short?) So, anyway, the light bulb came on one day when I remembered a sweater I had seen in this book. It's not exactly where you would expect to look for a sweater pattern, but there it was, nonetheless. I have been referring to this as my "bathrobe" sweater because it is just the kind of thing I like to put on first thing in the morning, even if I'm still in my nightgown. 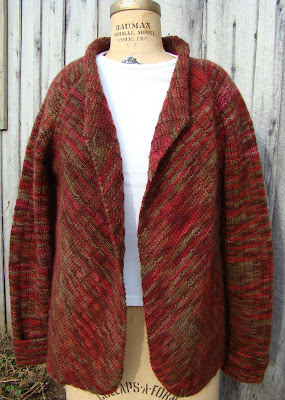 My model is certainly more svelte than I am (and she has no shoulders!), but what do you do when you're the only one home and are ready for a photo shoot? (And by the way, I have enough yarn left over for several pairs of fingerless mitts and hats...maybe even a cowl!) 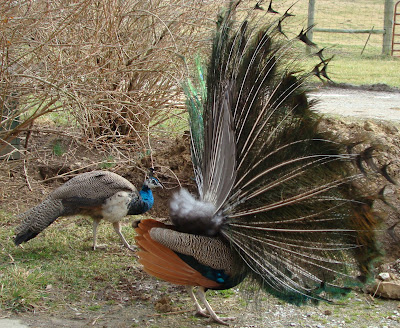 And while my model was patiently waiting for me to get everything adjusted, behind me was the usual farm "drama". Mr. Dandy was inspecting something (or maybe nothing) when along came a friend and he felt he needed to strut his stuff. As always, they were not impressed. I'm impressed with the color in those tail feathers. Aren't they gorgeous? He's growing them back out after moulting in the fall. 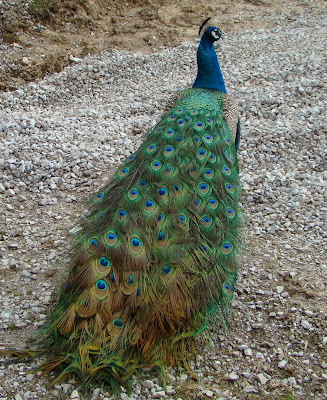 And what is that mess behind Mr. Dandy, you say? That is the project that is responsible for the endless days of rain we had this past week. Finally, work has begun on my studio!! I'm so excited about it. I keep telling myself, after waiting nearly 30 years for my own workspace, a few more days don't really matter. But, I sure wish it would quit raining and the sun would come out. 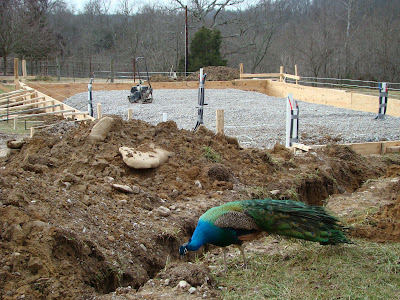 I hope the sun is shining for you this weekend, wherever you are!
Posted by Dianne MacDonald at 4:27 PM