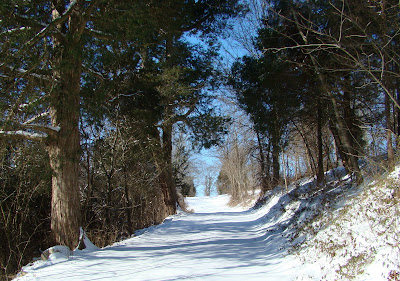 This was a very quiet weekend for me. Mike flew down to Florida to spend a few days with his mom and I was here on the farm alone (if that's even possible with so many critters). When the snow started coming down on Friday night, I knew I was going to take advantage of it and use my time alone to sit by the fire, do some knitting, spend some time (way too much) catching up on blog reading and generally take it easy. Except for doing twice a day barn chores and keeping everyone fed and sheltered, I've been doing as little as possible. 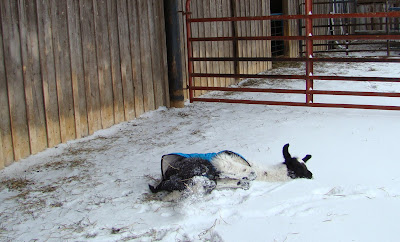 (Huckleberry's first snow bath!)
It was a frigid 4 degrees on Sunday morning. The animals don't seem to care at all. The rams and alpaca boys had snow covered backs, which tells me they bedded down outside during the snow storm, instead of going into their shed. Saturday morning when Huckleberry walked outside and got his very first glimpse of snow, he immediately went to his knees, then rolled over and took a snow bath! Isn't that amazing how their instincts kick in and they do something they couldn't have possibly been taught to do? Big sister, Pippi, is serving as a part-time baby entertainer now. The first week or so, Strawberry was very protective of little Huck, but I think now she's decided it's a good thing to have Pippi helping out. I think Pippi is happy to have someone to play with, even though she's such a big girl now. (Strawberry is a very serious kind of llama--no goofing around for her.) 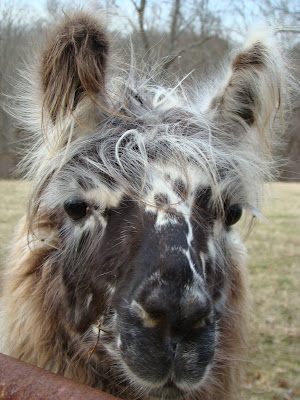 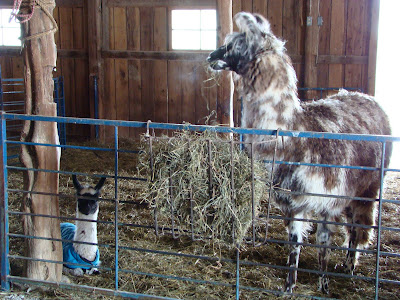 I walked out to get the newspaper yesterday morning and found that the main road was completely clear. As is often the case, I'm snowed in, but the world is going along normally without me! (and that's okay by me)

Posted by Dianne MacDonald at 5:02 PM