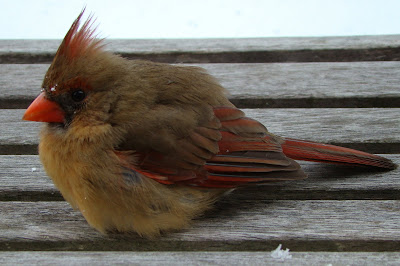 Last weekend I was sitting by the fire with my knitting when I heard something hit the glass doors in the sunroom. When I got up to investigate, all I could see was a bird's tail feathers sticking up out of the snow......barely twitching. It was a female Cardinal and she had knocked herself out when she hit the glass. Just a few days earlier a male Cardinal had flown into the kitchen window and was dead before he hit the ground. Anyway, I stepped out into the snow and gently picked up the bird. I wasn't sure what to do. My inclination was to bring her inside by the fireplace, but then I thought about how panicked she would be (and I had a momentary vision of her flying all over the house and me trying to catch her!). I set her up on the bench by the fishpond and sat nearby to see if she was going to come out of it. Typically, female Cardinals are described as dowdy...........nothing to look at compared to their male counterparts. The longer I sat there and watched her, the more I noticed how beautiful she was in her own right. She puffed her feathers up (maybe to keep herself warm while coming out of shock?) and looked right back at me, but didn't move. I was able to slip inside and get my camera and then get really close to her. She sat there for about 10 minutes and just as I was about to give up on her, she stretched her wings and flew to the garden arbor and began eating rose hips. I guess that makes the score Windows 1 - Cardinals 1.

I went to Richmond last Thursday night to babysit for Parker (one year old grandson) and, as luck would have it, left my camera there. I'm lost without it! Since I started blogging, I never go anywhere without it, even here on the farm. The weather is once again causing road conditions to be unpleasant, so it may be later in the week before I can retrieve it. Meanwhile, I guess I will be searching through my stored pictures for some things I haven't posted before.

We have a another winter storm warning for this evening. It snowed several inches last night and is now drizzling rain, so we are really mushed up. When all this freezes tonight it will be even more difficult to get off the farm. My plan is to take care of the animals, but otherwise stay by the fire and get some knitting and spinning done. Might as well make the best of it!
Posted by Dianne MacDonald at 12:44 PM