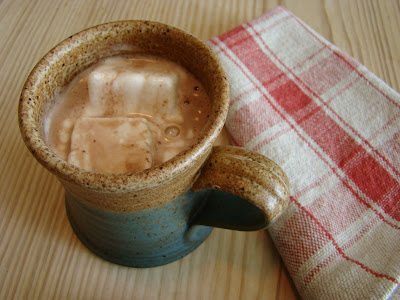 My kitchen has turned into a danger zone and I caused it myself. There are two things I have always wanted to try making (actually there are many more, but these two especially). A word of caution here........you are heading into dangerous territory! Have you ever made homemade marshmallows? How about caramel corn? Well, I can now say I have and, oh my gosh, I think I've opened Pandora's box. 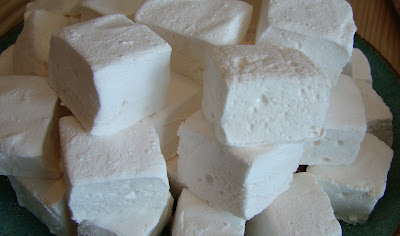 While Mike was gone this past weekend, I decided I would tackle the marshmallow exercise. First, I made a batch using a recipe from Martha Stewart Living. I think I made a mistake in the size pan I poured the mix into because it spread out in a thin and very sticky layer. The taste was good and I may try it again now that I've figured out a few things. The best recipe I found was one from this site. It's the egg whites that made the difference. The batch from the Smitten Kitchen recipe was light and fluffy and dee-lish!! I did pour the mixture into a smaller pan (lined with parchment paper and dusted with confectioner's sugar). I let it set up in the refrigerator overnight (except for that tiny little bit I had to taste). I dusted the top with more confectioner's sugar and then after a bit of trial and error, used my kitchen shears to cut it into neat little squares----just like real marshmallows!! I have a friend who is probably reading this and saying to herself, "Good grief, Dianne has really lost it now. Why would anyone make marshmallows from scratch?" I guess my answer would be because I can and because they are really, really, really good. 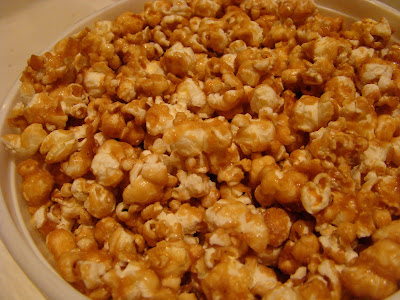 I'm pretty sure my friend will get the reasoning behind the caramel corn. Teresa and I have made a lot of trips to Chicago and getting caramel corn from Garrett's is a tradition for us. Sometimes we even take it back to our hotel, have a glass of wine and eat caramel and cheddar cheese popcorn for dinner! So, anyway.......I found a recipe here, searched the pantry to see if I had everything (minus the peanuts) and decided to try it today. The verdict: messy to make, but oh so worth it! Mike says it's the most addictive snack food he's ever had (that's a real compliment!).
So, if you're feeling like a little kitchen adventure, these two recipes would be something fun to try for the weekend. Believe me, they are worth the effort.
Posted by Dianne MacDonald at 11:30 AM