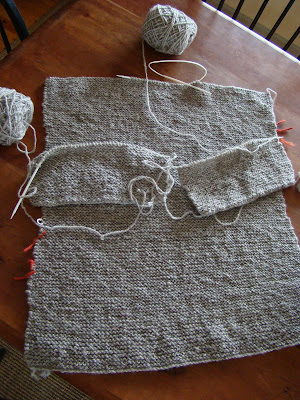 That would be my hopes for an Olympic medal. You know that saying, "Life is what happens while you are busy making other plans"? My plans were to get a lot of knitting done during the two weeks of nightly Olympic television watching, but life decided otherwise. It's probably just as well. Not long after I cast on for my Shepherd's Jacket, I read this entry on Kim's blog and thought to myself, "why don't I have enough sense to do that?" By day two of Olympic knitting, I was back to waking up at night with the carpel-tunnel symptoms. A few years ago, during a particularly graceful (!) fall, I tore the posterior cruciate ligament in one of my knees. The orthopedic surgeon told me then that he would see me soon.........because I was working on borrowed time with the carpel tunnel issue. So, between all that has happened around here in the past 10 days and the reoccurring pain, I hereby declare myself Unable to Finish the Course (sorta like Bode Miller--only not as dramatic). I'm still planning on knitting on my Shepherd's Jacket, just without the hope of a medal, though when I do finish all that garter stitch, I'm sure I will feel I deserve a medal!

Those of you who know me and my family, know that my oldest son's wife, Melanie, had a brain aneurysm almost four years ago. It was a very scary time for all of us who love her, but she made a miraculous, full recovery. Just a week or so ago, the unheard of happened and she had another aneurysm. Thankfully, this one was caught before there had been any bleeding. She had surgery last week and is now home and on the road to recovery again. Because this one was caught early, it would appear that recovery won't be such a long, arduous process this time. So, to all of you who have been sending good wishes this way, please know how very much they are appreciated.
Posted by Dianne MacDonald at 7:18 PM