It all started innocently enough. I read an email from Sunday Knits referring to a shawl pattern she had written to replicate the two shawls that appear briefly in the new version of the movie, Jane Eyre. After checking out the pattern and the Ravelry group already going strong, I was seized with an irresistible urge to knit the shawl. I bought and downloaded the pattern (and don't you just love being able to do that? Talk about instant gratification......if only we could download yarn in the same way!), searched through my stash and convinced Mike that we HAD to see the movie. It's a wonderful movie, even Mike enjoyed it. The two shawls make such brief appearances early in the movie, only real knitters would become so thoroughly obsessed, so quickly. So far, I've managed to enable encourage several other knitters to join me in this new obsession project (and I'll bet you are already entertaining the idea yourself. Right? might as well just give in to it). Who would have thought that knitting a short-row ruffle and some shoulder shaping could be so entertaining? 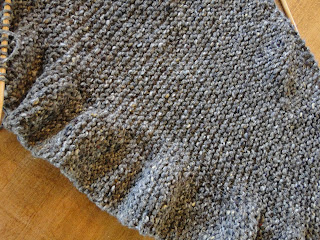 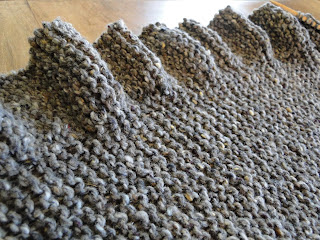 I'm using Jo Sharp Aran Tweed for my first shawl. I wanted something suitably rustic looking (you know, because I spend my days wandering the moors, just like Jane Erye).  As soon as I finish this one, I'd like to knit another one from some of my natural colored handspun. How about it? Ready to join the rest of us obsessive knitters? (and, if you do, betcha can't knit just one)
Posted by Dianne MacDonald at 5:32 PM