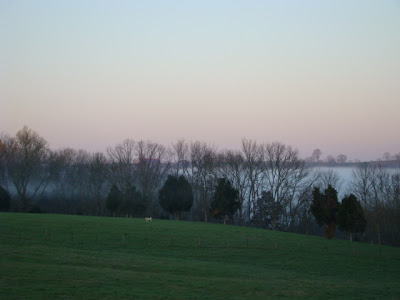 I'm not much of a morning person, but for various reasons I have been up before 6:00 am most mornings this past week. Evening is my favorite time of day. I love the quietness of animals settling down for the night and the feeling of being able to stop the day's labors and relax. In warm weather, I love to sit out by the fish pond, with a glass of wine, and watch the koi swimming gracefully around in their little world. It's the best relaxation technique I've ever tried. All that being said, this week the mornings have had their charms. The scene above was just before the sun came over the horizon yesterday morning, as I was walking back from the barn. The white you see is the mist rising off the river and the top of the hill (look closely--you can see a big barn with a red roof)is actually on the other side of the river from us. And, if you really look closely, you can see a big white dog running up the hill, on duty protecting her flock. 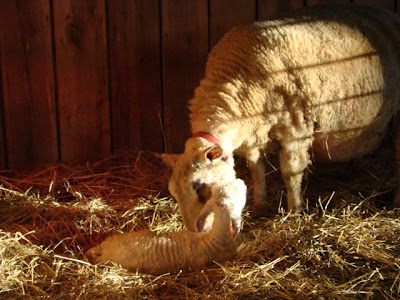 This morning's farm scene was happening in the barn. There was a lot of noise and commotion coming from the intercom early on. One ewe had given birth to a lamb and another ewe was sure it was supposed to belong to her. Everyone was confused! After separating the two ewes, the one in active labor produced one under-developed lamb (not alive), and then another big, healthy lamb. This group went into a lambing pen, out of sight from the other ewe. The remaining ewe finally decided she was going to have to birth her own lambs and proceeded to produce two very large, healthy ram lambs. Did I mention that all of the first set of lambs (including the under-developed one) were also ram lambs? So, the last three births have all been ram lambs! What's with that? (The count is now 7 ram lambs and 4 ewe lambs.) 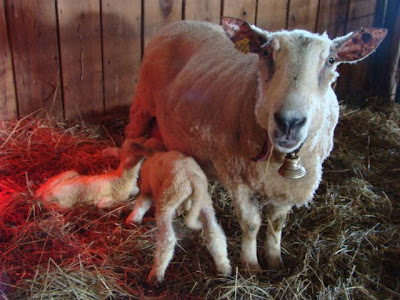 The pressure is on the last ewe standing. She needs to produce some ewe lambs to help even the score. I believe she will lamb this weekend (though I have been known to be wrong with these predictions), so we don't have long to wait until we are finished with the 2009 lambing season.

Added later--Change the count please. There are now 7 ram lambs and 5 ewe lambs. The last ewe lamb joined her two brothers while I was away from the barn (announcing the birth of twin boys)! So instead of twin boys, we have more triplets! Mom is doing a good job with all of them, so far.
Posted by Dianne MacDonald at 10:50 AM