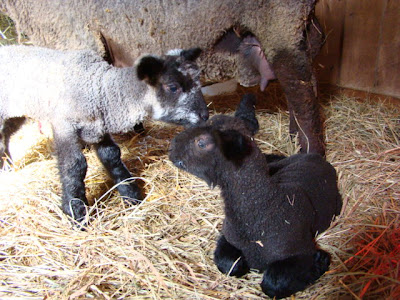 Last night around midnight I heard those familiar noises coming from the intercom connected to the barn. I quickly dressed and went out to see what was going on. Crazy Eyes had been having trouble for several days getting herself up and down and walking. It appeared that the lambs were pressing on nerves going to her back legs and she was pretty shaky on her feet, so I'd been hoping for and at the same time dreading her delivery. She was the one making all the noise. I prepared a lambing pen while I was observing her behavior, trying to gauge how far along in the process she was. After a while, I decided to palpate her to check on the lambs, and, when I did, what I found was one leg. That's all. Then, much further back was the other leg and then, finally the head, turned the other way. In the proper presentation, lambs enter the world as if they are diving out----both front legs extended and the head tucked between them. I spent a long time trying to re-position the lamb, which was very much alive and fighting me the whole time! (And Crazy Eyes wasn't too happy with how things were going either.) I ended up waking Mike and between the two of us, we were able to get the two huge ram lambs out. Both lambs were pretty stressed and needed quite a bit of stimulation to get their breathing stabilized. We milked the ewe and used a stomach tube to get some nourishment into the lambs and gave the ewe a shot to alleviate some of the soreness. I stayed at the barn with them until around 4 am, mainly to make sure Crazy Eyes didn't fall on the lambs and be unable to get up. When I checked on them this morning around 8:30, I was thrilled to see that the lambs and the ewe were up and doing great. The firstborn ram lamb is solid black and the second one has some black and a beautiful silver saddle across his middle. They are Bluefaced Leicester/Romney crossbreds and should have gorgeous fleeces. And, these boys are already bigger than the lambs born last week!

So that makes the count 1 set of triplets, 2 sets of twins, (4 ewe lambs and 3 ram lambs) and more to come soon.
Posted by Dianne MacDonald at 12:54 PM