Can you see that creature sitting up there in the snow? (click to enlarge) Yesterday as I was trudging to the barn for evening feeding, I heard Holly barking, barking, barking. She was barking an alarm bark, not just a warning bark and bouncing up and down with each bark. It took me a while to see this guy sitting out there watching the sheep. The whole scene was at once alarming and reassuring. Alarming because coyotes are usually out and about after dark and rarely do they come within sight of the house and barn. It was reassuring because Holly was doing exactly what she should. She hadn't abandon her sheep to chase the coyote. She had rounded up the ewe lambs and put them in the corner of the field nearest the big barn. Once she had them in the safest available spot, she placed herself between the lambs and the coyote and continued barking and moving slowing toward it. The coyote loped off toward the back of the farm. Holly has been on high alert since this happened, constantly patrolling and giving her warning bark.

There seems to be a larger than usual coyote population right now. A few nights ago, as I was walking from the barn to the house, I heard a big pack howling and yipping from the back of the farm, only to be answered by another large pack down in the creek below our house. Talk about raising the hair on the back of your neck....that'll do it! We don't hunt or trap them, but I wouldn't rule out the possibility, if one were to attack Holly or kill one of the sheep. We try to coexist. We won't bother them, if they don't bother us or the livestock. 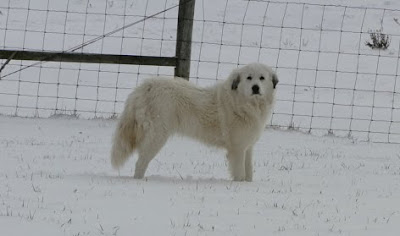 When Holly first arrived here, we figured she had been born around Christmas time. She has matured into one of the best livestock guardian dogs I have ever owned. I'm thinking she may need some kind of combination birthday present/reward in the near future. Good girl, Holly!
Posted by Dianne MacDonald at 3:50 PM