Not quite the peaceable kingdom...... 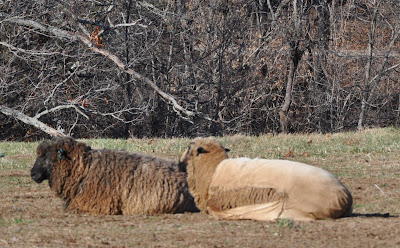 Finally, after a lot of head butting, shoulder shoving and general bully-boy acting, we have achieved a truce. When I took the rams away from the ewes in their breeding groups, I dreaded putting them back together. Most of the year, they get along well enough. I would say they even become pals. But, as soon as the ewes start cycling, the boys get restless and then every day it's "I'm more rammy than you are"....pretty much nonstop until I separate them and put them in with their ewes. Henry is a new addition to our flock this year and Ollie is not impressed or pleased (but, I think the girls were!). As usual, I penned them together in a very, very small space in hopes that they would not hurt each other in the time it took for testosterone levels to come down. I penned them together so they could barely turn around and still they were pushing and shoving after a week. I gave them a little more space and after another few days, turned them outside together. I think Henry got the worst of it, but they finally have settled down. Henry is an old guy and he made a valiant effort at being the dominant one, but Ollie is not quite two and that gave him the physical advantage.

(Yes, I know...the coat is done for....I took it off and found it's beyond repair. That's his third and LAST coat for this year!) 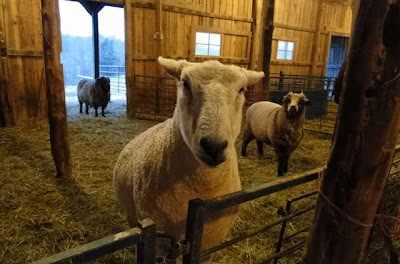 (Seriously, what's not to love about that face?)
Then, there is poor Buddy (he's a wether), who got thrown into the pen to serve as a peace-maker. He's bigger than either of the rams and could intimidate them, if he only knew it. He's such a big baby and sweet boy. He'd rather be baby-sitting those silly ewe lambs than dealing with the rough old boys. (And, by the way, don't let anyone tell you that bottle raised ram lambs won't ever amount to anything. Sometimes they do, because Buddy was a nice guy, even before we took away his ramhood!)

Posted by Dianne MacDonald at 6:00 PM