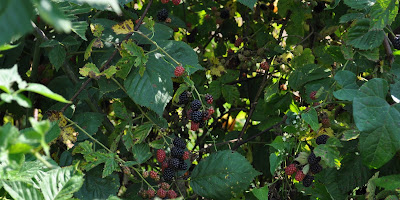 Not the music kind.........the blackberry kind.  We are struggling to keep up with the ripening berries (and beat the birds to harvesting them).  When I buy blackberry jam, I usually go for the seedless.  Those pesky seeds are something I can do without.  I've discovered that our thornless blackberry's seeds don't seem as aggravating somehow.  They are softer or there are fewer of them?  I don't know,  but I like my homemade jam better than Smuckers or even Bonne Maman.  Last week,  I made lots and lots of blackberry jam and tried out several different methods,  with varying degrees of success.  First, I tried freezer jam because it takes much less time and effort.  I followed the directions exactly and it never did "set up".  I ended up freezing it anyway,  thinking we would use it as an ice cream topping.  I had a small amount left over,  after filling the jars,  and I refrigerated it,  thinking we'd use it soon.  Then, I discovered that once it is chilled,  it actually does set up.  I later read that it is supposed to be "soft set".  Mine didn't even make it to that, but it still tastes good.  The next batch was made with a pouch of liquid Certo.  Once again,  following exact directions.........and,  it did not set.  I put all that back in the pot and cooked it a little longer than the package directions.  That did the trick.  The most successful batch resulted from using the boxes of powdered Sure-Jell.  I did cook it a little longer than the directions and it turned out perfect.  So, for my money, it's worth the effort to make a bigger mess and be sure of the results. 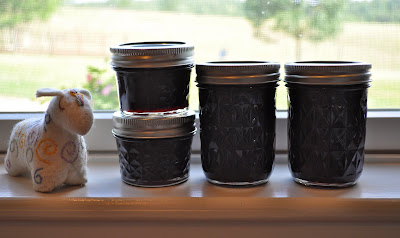 I think we have had one day of not quite so high temperatures and humidity and are now back to the miserable stage.  If this is the way summers are going to be from now on, I think I'm going to start looking for a farm in Maine!
Posted by Dianne MacDonald at 12:47 PM