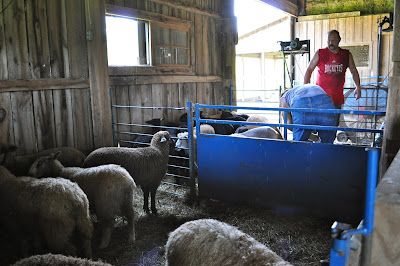 Yup,  it was one of the hottest days of summer so far, and what did we do here on the farm?  We sheared sheep.  ( And,  by the way,  around here that's what we like to call the "Royal We".  I didn't actually shear anything. )  The lambs were still wearing their baby fleeces and, in my experience,  they eat better and grow better if they get shorn while we are in the heat of summer.  Plus,  it cuts down on the likelihood their fleeces will have weak tips when shearing time comes around next spring.  I felt bad for the shearers and the lambs, but all I could do was pass out cold water and keep the big barn fans pointed in their direction.
The lambs sired by Henry have the most gorgeous fleeces.  Henry is a Cotswold-Wensleydale crossbred and he passed on the length and luster that are characteristic of those two breeds.   I'm so impressed with those fleeces that I'm planning on keeping many of Henry's daughters for replacement ewes.  I'm afraid Henry's breeding days are over.  It appears he has done permanent damage to one of his back legs and having two strong back legs is an absolute necessity for a flock ram.  I'm grateful that I got such wonderful offspring by him and now wish I had exposed more ewes to him last fall.

Getting those fleeces off gave me a good look at my lambs and there were some I was not happy with.  We've been having the same issue as most other sheep breeders lately.  This hot, humid weather is causing an unusually high parasite population,  which seems to have developed resistance to the de-wormers we use.  Two years ago,  we switched from Ivomec to Valbazen and now that no longer seems as effective.  There is apparently a new de-wormer being used in New Zealand,  but things move very slowly in the world of sheep medicines here in the states,  so we will be waiting a while for that.  Luckily,  our adult sheep aren't as susceptible to internal parasites.  It's only some of the lambs that seem to be suffering.   Next up in our arsenal is Levamisole,  which has become difficult to find because apparently drug dealers are using it to cut cocaine.  Turns out that when humans ingest it, it starts eating away flesh.  Lovely. 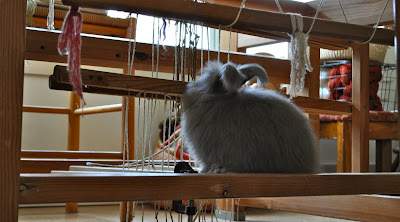 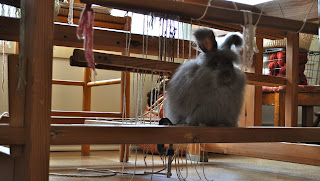 On that note,  I'll leave you with some gratuitous pictures of the Bun.  She is allowed out to run around the studio two or three times a day now.  Still no "accidents".  She is using her litter box all the time.  ( I'm so proud )  Anyway,  sitting on the treadles of my loom is one of her favorite activities.  My loom is a Glimakra and the treadles hang from the lams,  so there is some movement when she's walking around on them,  which she apparently does for the thrill of it.  I guess she's more easily entertained than even I am.
Posted by Dianne MacDonald at 8:00 AM